Toyota is celebrating the Land Cruiser’s 70th birthday by releasing a limited-edition version of the 37-year-old 70-Series model on the Australian market. Offered in several body styles, the aptly-named 70th Anniversary truck gains a handful of visual tweaks, an interior that’s nicer than the standard model’s, and a little bit more tech.

Buyers can order the special Land Cruiser as a pickup with a single or double cab, or as a wagon. Available in French Vanilla, Merlot Red, or Sandy Taupe, the 70th Anniversary gains a specific grille with “TOYOTA” lettering instead of the firm’s oval emblem, tinted headlights, black paint on the front bumper and on the fender flares, plus 16-inch wheels with a dark gray finish. The front fog lights and the daytime running lights gain LED bulbs.

Inside, drivers expecting an old-school rudimentary cabin are in for a major surprise because Toyota made several upmarket features available on a 70-Series for the first time. The list of standard equipment includes black leather upholstery, imitation wood trim on the dashboard, silver accents, and a newly-designed center console with cupholders and a pair of USB ports. Edition-specific logos inside and out add a finishing touch to the look. 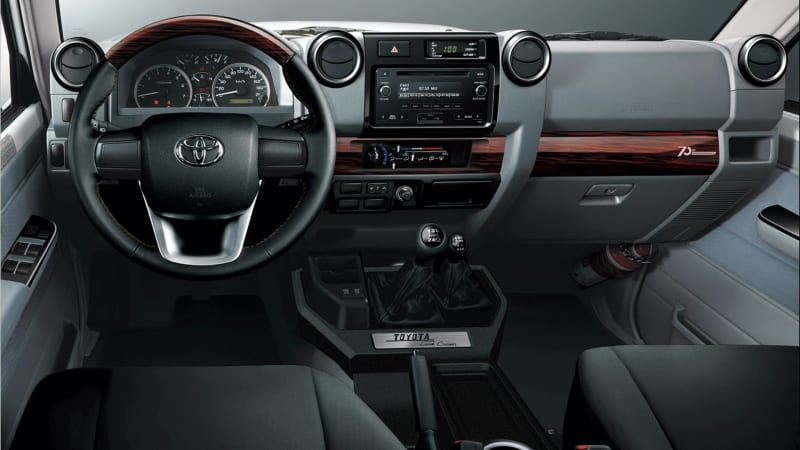 Toyota is not making any mechanical modifications to the 70th Anniversary model. It’s powered by a stout, 4.5-liter turbodiesel V8 engine rated at 202 horsepower and 317 pound-feet of torque. It spins the four wheels via a five-speed manual transmission (you’re out of luck if you want an automatic). Every commemorative Land Cruiser will offer users a snorkel, low-range gearing, locking front and rear differentials, plus a 7,700-pound towing capacity.

Nothing suggests Toyota will celebrate the Land Cruiser’s 70th birthday with a limited-edition model in the United States. The next-generation 300-Series model reportedly won’t even be sold on our shores, though we might get its Lexus-branded sibling. However, the Japanese firm marked the milestone by announcing plans to re-release a selection of hard-to-find parts for the 40-Series Land Cruiser (also called FJ40) built between 1960 and 1984.

While the Land Cruiser nameplate appeared on a Studebaker decades before Toyota used it, it’s more commonly associated with a long line of off-roaders than with a company that hasn’t built a car since 1967. And yet, the first Toyota Land Cruiser isn’t exactly turning 70 in 2021. Toyota is celebrating the 70th anniversary of the BJ, a Jeep-like 4×4 developed to secure a contract with the Japanese armed forces. Officials chose a Jeep made under license by Mitsubishi, leaving Toyota with a fully-developed car and no one to sell it to. The BJ consequently became the BJT (for touring) and was sold to the public in select markets; most historians agree no more than 300 units were built.

The name Land Cruiser was first used by Toyota in 1954, and the 20-Series made its debut the following year. Sales in the United States started in 1958, a year after Toyota opened its American division by turning a former Rambler dealership in Hollywood into its headquarters, and one Land Cruiser was sold here that year. Shown above, it spent years plowing snow before ending up Greg Miller’s Land Cruiser Heritage Museum in Salt Lake City.

10 actions businesses can take to convert their fleet to electric

All articles, images, product names, logos, and brands are property of their respective owners. All company, product and service names used in this website are for identification purposes only.

Use of these names, logos, and brands does not imply endorsement unless specified. By using this site, you agree to the Terms of Use and Privacy Policy.