Indian Actress Gul Panag, who is also a model, and entrepreneur has been featured on our website several times. She is one of those actresses from the industry who is an automobile enthusiast. Gul Panag likes road tripping and she is probably the only actress from the industry to own a Mahindra Scorpio Getaway. This dual-cab pick-up has been heavily customised for off-roading and adventure road trips. Gul Panag is also an advocate of clean energy and is a co-founder of Sunfuel Electric, an electric vehicle charging startup. She recently took delivery of a brand new electric auto rickshaw. The actress bought Mahindra Zor Grand electric three-wheeler.

Welcome to our last mile family @GulPanag .. we are thrilled to have you as our customer and cant wait to see what you accomplish with this silent electric workhorse #ZorGrand @MahindraElctrc @rajesh664 pic.twitter.com/qWkMa9vlIr

Suman Mishra, CEO of Mahindra electric shared the picture of Gul Panag with her new electric auto rickshaw on Twitter. She wrote, “Welcome to our last mile family @GulPanag .. we are thrilled to have you as our customer and can’t wait to see what you accomplish with this silent electric workhorse.” Below this post, the actress also posted a video of her driving the new electric three-wheeler. through a narrow village road. electric vehicles have penetrated into the commercial vehicle space just like the passenger segment. We have several manufacturers in the Indian market who are focussing on offering electric vehicles specifically for the commercial segment. Mahindra is one such manufacturer who launched Zor Grand cargo electric three-wheeler in the market this year. With the launch of Zor Grand, Mahindra Electric is looking to revolutionise the last-mile delivery sector in the country.

We’ll, IMO, best kind of Brand Ambassadors are the paying kind.😀
You’d be surprised with the uses, it has for me, and are those like me, who run establishments that focus on clean energy. pic.twitter.com/UV3KotPT15

The electric three-wheeler from Mahindra is priced at Rs 3.60 lakh, ex-showroom. The Zor Grand is powered by a 10.24 kWh Lithium-ion battery pack that powers a 12 kW electric motor. The electric auto rickshaw generates a maximum of 50 Nm of torque and that helps it in climbing steep roads without any major issues. The Mahindra Zor Grand has a certified driving range of 153 km but in real-world conditions, the three-wheeler would return around 100 km on a single charge. The batteries can be fully charged in 4 hours’ time and the top speed of Zor Grand is limited to 50 kmph.

Like many other electric cars or vehicles, this three-wheeler also misses a conventional gearbox. The three-wheeler gets Forward, Neutral, and Reverse modes on the right side of the handlebar. The Mahindra Zor Grand is available in Delivery van body and pick-up style body. Gul Panag bought the pick-up-style version. It is definitely a decent alternative to diesel and CNG three-wheelers that we have in the market. The cost of ownership and running cost on this three-wheeler would also be low when compared to ICE versions. 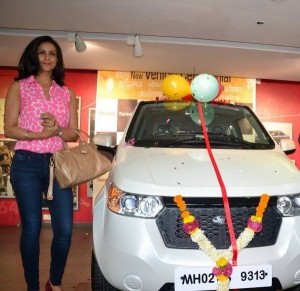 Gul Panag as we mentioned above is an automobile enthusiast and she has a good collection of motorcycles and SUVs. This is not her first electric vehicle. She has a Mahindra E20, which was a small city electric car launched by the Indian car maker in 2013. The car was gifted to Gul Panag by her husband on her birthday. Other than E20, the actress owns Mahindra vehicles like current generation Mahindra Thar, Alturas G4 and bikes like BMW F650 Funduro, Royal Enfield, Triumph Bonneville T120, and Jawa 42 in her garage.

Also read: Oppo to launch electric vehicle in India by 2024

A Weekend Hunting Speed On Film