Okay, I’m veering off the theme here on the very first month, because I’d rather post a photo of a sweet Camaro than of the Subaru Outback Wilderness fruitlessly trying to connect to its Subaru cloud server to diagnose its electronic maladies, but failing to do so because I’d gotten it stuck Out Back in the Wilderness where there was no cell service whatsoever. Plus, I’m writing this in International Waters, where rules don’t apply. (That’s capitalized because International Waters is the name of my local bar.)

Anyway, in January the used-car market was so wacky that when I went to my local Jeep dealer to stalk Gladiators, they had a 1990s Camaro on the lot. This is normally the type of trade-in that goes straight to the dealer auction for eventual sale at Lenny’s Used Kars and Small Engine Repair 10 miles out of town out on Route 57, but in January the car supply was still so tight that new-car dealers would take whatever they could get. Including Camaros built in an entirely different millennium. Not that I’m judging. It was a wicked Camaro. It sold quick.

Sometimes, we write reviews of limited-edition cars that are already sold out, because they’re interesting and maybe you, the reader, might take a crack at buying one used in a few years. But lately we’ve had to deal with the challenge of covering vehicles that are constrained by supply-chain problems. 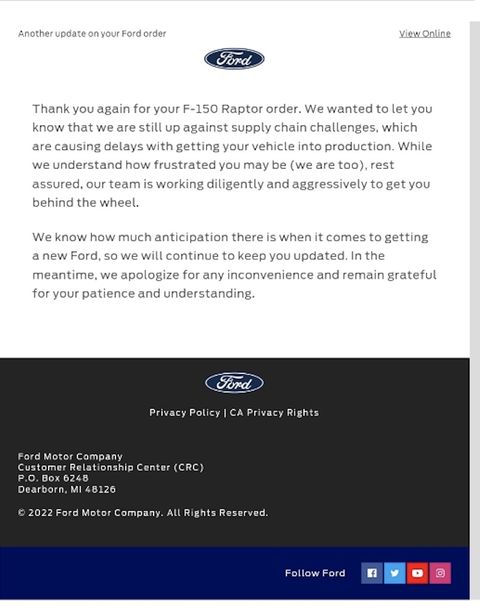 For instance, my friend Steve ordered a Ford F-150 Raptor with the 37-inch tire package right around the time I drove one in early February. Then he waited. And waited. Ford sent him a series of letters saying that they’d really like to build him a Raptor with 37s but couldn’t. (The notice here was sent in late October.) If he wanted 35-inch tires, though, no problem! So he eventually just went with the 35s. Unfortunately for Ford, they were bolted to a Ram TRX.

March: I Discover That the Kia EV6 Has a Poor Self-Image

Some cars go to great lengths to accurately depict themselves on their in-vehicle displays, sometimes even representing the correct paint color on the actual car. Not the Kia EV6! When you summon the battery state-of-charge display on the EV6, the Kia depicts itself as something that looks like a joint venture between Daewoo and the Chinese government circa 2002. Somewhere at Kia, there is a memo buried deep under a stack of papers that reads, “Remember to make that blobby hatchback thing with the solid featureless wheels and six-inch-wide tires look like the actual car before production.”

All turbocharged engines love premium fuel, whether they demand it or not (an accidental tank of regular unleaded turned an EcoBoost Mustang to a total mope at Lightning Lap back in 2015). But Mazda is one of the outliers that actually provides separate horsepower ratings according to octane. In the CX-50 Turbo, filling it with 87 octane gets you 227 horsepower. Running 93 octane, it’s rated at 256 hp. Torque improves, too, from 310 lb-ft to 320 lb-ft. That’s a difference you can feel. So if someone asks you whether premium fuel really matters, your first response should be, “You got a Mazda?”

May: The Kona N Only Knows Five Tracks

During some downtime with the Kona N on the Cherohala Skyway, I fiddled around with the sub-menus on the infotainment’s performance pages. There I discovered that the N offers track maps of various road courses, which I’d think would add some VBox flavor to your lapping sessions, assuming you don’t have an actual VBox. However, the Kona only knows five tracks: Atlanta Motorsports Park, Homestead-Miami Speedway, Lime Rock, Road America, and Watkins Glen. It’s a cool feature—if you live near one of those tracks. On a sort-of-related note, the Genesis G90 can make its sound system emulate the acoustics of any concert hall in the world, as long as it’s Boston Symphony Hall.

June: The Lucid Air Makes You Sign a Disclaimer to Unlock All the Power

My first, and so far only, encounter with the Lucid Air was at our EV of the Year testing last summer. This was the 819-hp Grand Touring rather than the 1111-hp Dream Edition Performance, but it was still violently quick, hitting 60 mph in 3.0 seconds. However, I think the disclaimer screen to unlock Sprint mode was a little much. It was the EV equivalent of a carnie making you sign a waiver before heading over to ride the Matterhorn. Settle down, Lucid Air. You’re one second quicker to 60 than that F-150 over there. I did, however, appreciate the implication that I am a “skilled, advanced driver.”

July: The BMW iX Leads Me to Meet Drifter Dave

Under the long list of things that might happen at gas pumps, I’d put “making a new friend” at number 10,534, right after “get squeegee water in your eyes somehow” but before “have your gas paid for by a friendly Sasquatch.” But that can happen at EV chargers, where everybody has more time to kill and at least one thing in common. And that’s how I met Drifter Dave, as he’s now labeled in my contacts. I stopped for a charge in the BMW iX and there was a Ford Mach-E at the adjacent charger. Dave was there with his wife (it was her car), and we started talking about the BMW. Then he told me about how he was into drifting and showed me photos of his E36 drift car. A month or two later, I gave him a call when I was at Charlotte Motor Speedway to drive the Mach-E 1400, and we ended up riding around in the Eluminator concept truck and getting hellrides with Vaughn Gittin Jr.

Which, again, is the kind of thing that I’ve never had happen at gas pumps. Although I did once meet a former Ford engineer named George who worked on the original Thunderbird, and I let him drive a Bentley across the parking lot to prank his wife. But I don’t have George’s number. That’s how charge stations are different. Anyway, a few days after I met Dave, a squirrel hucked a big, sappy pine cone out of a tree and broke the BMW’s windshield. So I guess July is a two-parter, but I told you I play by nobody’s rules but my own. 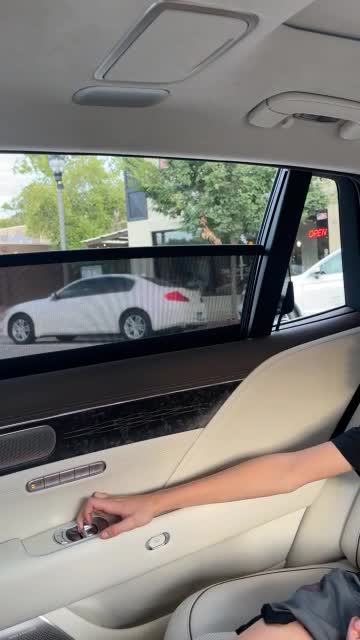 Among the G90’s bargeload of motorized and luxed-out features (remote parking, power doors, an interior fragrance dispenser), I was especially impressed by the motorized side window shades. Lots of cars have window shades, most of them manual affairs that pull up and latch on the hook. Really fancy rides have motorized shades. But the G90 has two shades per side. In addition to the main window shade that deploys vertically, they hid a horizontal shade in the pillar for the small rear quarter-window. That’s attention to detail. Sorry, paps. I will not be seen unless I deign to allow it.

September: The Acura MDX Type-S Does Not Want Your Cold-Air Intake 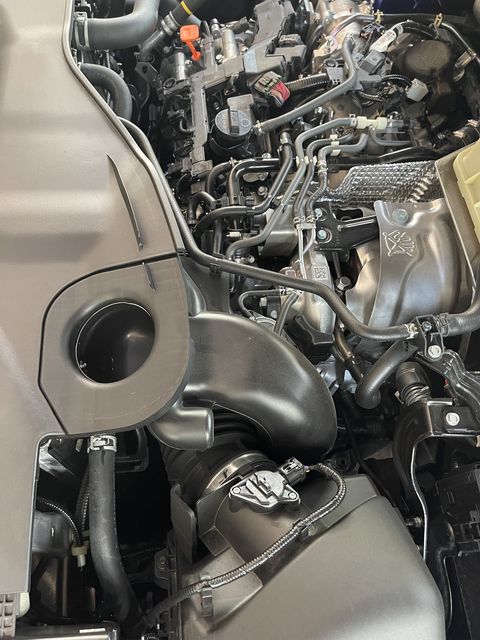 I like to peek under the hoods of test cars, particularly ones with new engines, like the Acura MDX Type S and its 355-hp turbocharged V-6. And the Acura V-6 intake plumbing drove home the point that car companies do a whole lot of work to arrive the finish line in any particular area of development—just look at this intake plumbing. Air is pulled from up under the edge of the hood down into this device that looks like a Dr. Seuss musical instrument, complete with some kind of appendix-like resonator, before it even gets to the airbox. You hear some turbo intake whoosh but can presumably splash your way through some serious water without fear of drowning the thing. If you wanted to bolt on a big K&N cone filter and call it a day, be my guest, but I imagine doing so would cause a certain number of Acura engineers to come TP your house, and not even on Halloween.

October: The C8 Is Still a Corvette When It Comes to Panel Gaps

As I’ve chronicled more than once, the C8 Corvette takes Chevy’s supercar to new levels of sophistication and performance. But check out the panel alignment on this one. Pretty sure your fender isn’t supposed to cast a shadow on your door. Somewhere, a C3 owner is nodding knowingly.

When my 12-year-old kid climbed into the Infiniti QX60 Autograph, he immediately declared, “This seems like the sort of car that would have massage seats.” A moment later, he’d found the button and confirmed his suspicion. And while I know that the top-of-the-line QX60 is a not inexpensive machine, with a base price above $60,000, it still kind of surprised me that it had massage seats. This marked the moment for me when I realized that massaging front seats are to be expected in a certain class of vehicle, even ones that are luxury versions of mainstream crossovers. I think the signifier is quilted leather, of which the Autograph has plenty. If I see quilted leather, it better come with some massage seats. Even if they’re the ones that just feel like you’re being kneed in the kidneys by the cretin sitting behind you on a redeye home from Vegas. Which is not what the QX60’s feel like. Its system makes it feel more like your seat is alive and trying to squirm away and explore the world outside the car. Actually, now that I mention it, that’s what they all feel like. But they’re everywhere now, so get used to it!

December: GM Doesn’t Make a Big Deal of It When It Gives Super Cruise New Abilities

I was driving on a back road in the 2023 GMC Yukon Denali Ultimate when I went to engage cruise control and noticed the gray steering-wheel icon displayed in the instrument cluster—the Yukon’s way of saying that Super Cruise hands-free driving was available, if I wanted it. Super Cruise on a road with oncoming traffic? I didn’t think that would work, but when I pressed the button, the top of the steering wheel lit up green and the truck calmly centered itself in the lane and assumed (supervised) control. To which my reaction was: HUH? Since when has it been able to do this? I’d driven a Sierra with Super Cruise earlier in the year, and while it was able to negotiate a highway interchange, it never offered Super Cruise on back roads. Was this Yukon some kind of a sneaky beta-test vehicle? Maybe I stumbled upon some code I wasn’t supposed to find. So I e-mailed GM to ask and they said yeah, they put out a press release about that. No big secret.

And while that was true, it’s not like they made a big deal about it. They didn’t produce any ads touting this new ability, which seems an order of magnitude harder to execute than divided-highway driving. And it makes Super Cruise that much more useful. On one two-hour trip in the Yukon, more than half of it was on Super Cruise roads. So, did you know about this? Well, now you do. So the only thing you might still be wondering is what was going on with that photo up top with the monster truck and the Bronco Raptor. And you’ll find out. But not this year.

Tesla domination to be boosted as new armada arrives