Wow, what a difference a year (and change of government) makes.

Although the wait lists for some EV models have blown out alarmingly, the fact is when I last updated my Australian EV Buyer’s Guide in 2021, we had a mere seventeen full-battery EV (BEV) models available.

I began that last Buyer’s Guide article by writing:

I hope one day the need for this sort of article will be gone and my job will be done. That day I expect will be:

I don’t thing think that day has arrived yet, but it is getting closer. Overall, in 2022 worldwide plug-in electric vehicle sales (PEVs) are looking to pass 12% and Europe has already passed 20%.

Even in Australia we have moved from 0.6% in 2020 to 3.4% this year (and 4.7 per cent in November). We might still have a way to go on the second point – but hopefully a few motoring writers read my recent article explaining how to tell a kW from a kWh. ☺

As for the third: I am definitely seeing more and more shuttered petrol stations.

So for this review, I’ll change the format of my previous Buyers Guide articles, to categorise the current and the soon to arrive EVs here into my personal ratings for:

Back in 2019 when I bought my Kona, EVs started at mid-$50k for the 28kWh Hyundai Ioniq or the 40kWh Renault Zoe … and went up in big jumps from there.

Now we now have not one but TWO mid $40k BEVs – the MG ZE EV and the BYD Atto 3, both with longer ranges than the Ioniq or Zoe had in 2019. Both are also made in China and, in standard form, similar diving ranges and battery sizes.

The BYD wins out if you want a longer driving range as there is an optional bigger battery – although that does push the price to just over $50k on the road. Mind-you, the longer range MG available overseas is also rumoured to be in the wings for Australia, provided you have the time to wait and see.

Evening up the pair is the recent addition of a tow rating to the Atto 3, meaning the two cheapest EVs currently on the market also offer towing. For the moment, it is pretty much a tie for a ‘winner’ in this category.

Beyond that, it comes down to personal preference.

On the other hand, if you’re prepared to wait 6 – 12 months: some additional choices in the mid- $40k bracket are likely to arrive, including the MG4 and the Ora Good Cat. (Interesting, both also made in China). It seems the onslaught of the cheap Chinese EV I have been predicting for some years now is finally happening.

There is some overlap between city and bang-for-buck EVs as both don’t need a longer range battery that adds to the overall cost. (As noted in my article here).

However, for city car I would include all the smaller EVs, irrespective of price – in which case the Mini Cooper, Mazda MX-30, Audi e-tron 50 and the Lexus UX300e also come into play.

All these offer between 200 km (Mazda MX30) to 345 km WLTP range – which is way better than the original Leafs or iMiEVs. Interestingly, the short range EVs are getting longer: the BYD Atto 3 standard range plus the coming standard range version of the MG4 are included here, even with their around 350km driving ranges. By the way, I didn’t list the Audi e-tron 50 in the table below as it is currently on run-out and an update version with a longer range is soon to come out.

For fun driving, it would be hard to go past the Mini Cooper. For boot and passenger space the 40kWh Leaf or the MG ZS EV probably win. Overall – buyers are the winner here as there is actually a reasonable choice of EVs in this category! 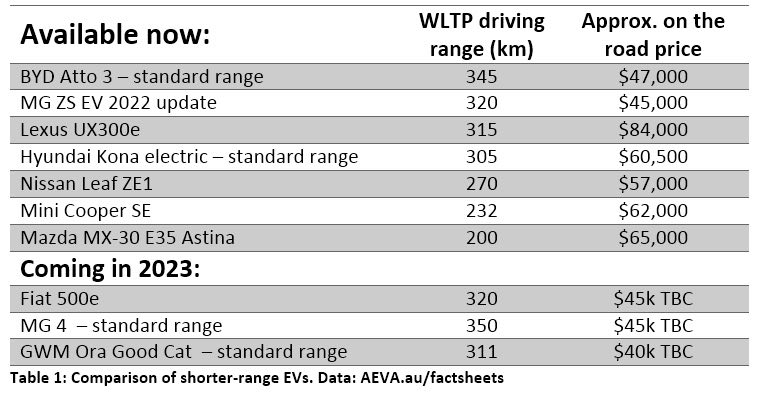 For long-rangers, I will arbitrarily choose anything that approximately equals or exceeds my Kona. The Kona makes a good effort in very long drives (like Melbourne to Perth), if let down slightly by its slow (by current standards) AC and DC charging rates. So my criteria for selecting a good ‘long-ranger’ are:

Note: I have also set an upper bound of $100,000. This means the likes of the BMW i4 and iX Drive50, Mercedes EQS, Genesis G80 and Porsche Taycan are not included, even though some offer ranges north of 500km. Interestingly, this stricture also ruled out the Tesla Model Y Long Range, as it is currently only offered here in Performance trim, pushing it out to nearly $108,000.

You will also note I have mixed the vehicle size and type categories somewhat as there is a mix of small and medium SUVs as well as passenger cars – but most are around the 4.3m to 4.7m range in length and most are SUV/crossover in style, so I would contend they are not as disparate as they first seem. 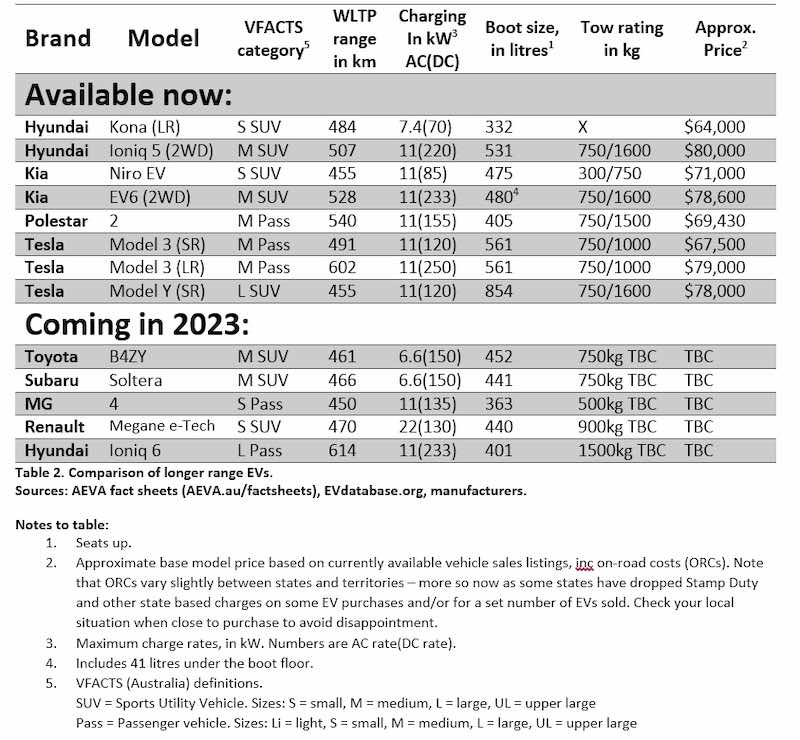 Some notable exclusions from this category were the Mercedes EQA and the Volvo C40/XC40. While all three have WLTP ranges over 400km, they didn’t make it past my (admittedly arbitrary) choice of 450km. All three would still do a long-trip reasonably comfortably, so feel free to add them to your personal lists if looking for ‘EV Long Weekend’ cars.

When I bought my Kona back in mid-2019, it offered the best EV driving range for the lowest price. As I wrote at the time, to do better would have necessitated spending something like $30,000 more on a Tesla Model 3 Long range. Now, my Kona barely gets a look-in!

All up, this is a very competitive segment. For the best mix of charging speed, driving range and boot room – the Ioniq 5 and Tesla Model 3 Long Range are fighting it out for the win.

The Tesla wins on range, the Ioniq 5 on tow rating (1500 vs 1000 kg) and boot access (the Tesla has a boot lid, the Hyundai a large hatch). However, all would make good choices depending on your charging speed, luggage room, people space and towing needs.

If waiting until next year, then the MG4 with a reported price tag in the mid-$40k bracket will become the stand-out price winner, although this choice will require you to make a few compromises regarding driving range, boot space and towing capacity.

I say ‘picks’ with tongue-in-cheek, as currently there are too few to be discriminating: for any current business use-case, there is generally one … or none … to choose from. Thankfully, options are beginning to appear with more to come in 2023.

So the winners here? Any business that can find a light commercial EV that matches what they need!

And now to my last category ….

What Were they thinking?

The contenders for this award I suggest are:

Lexus UX 300e: With a range of 315km, small boot size (367 litres in a 4.5m long car), a price tag of $84,000 dollars and, to add the icing on the cake, using the CHAdeMO DC system when virtually all the other manufacturers have given up on it in favour of CCS… well there’s not much going for it. Thankfully, the UX300e is getting a bigger battery in 2023, so it might migrate out from this category into something useful for 2023.

Mazda MX-30. At 200km range, a DC charge rate of 37kW and a price tag of $65,000, it would have made an innovative and interestingly quirky EV to rival the BMW i3 … back in 2014. Now, the specs and price seem antiquated. With that driving range but priced at $40,000, it could have been a contender for an interesting city car – but even there, a 200km range is getting to be considered too short. With its current list price, but a range approaching 400km, it could be a candidate for ‘good all-rounder’ – although there are better offerings for that price and driving range. But at 200km AND a $65,000 on-the-road price?? It’s definitely a contender for the ‘what were they thinking?’ category.

For this one, I am going to call it a tie.

It’s now over to you, the reader. This is my personal take on the Australian BEV market at the end of 2022. I am sure that some of you will agree with my lists, some will want to see some tweaks – while others will disagree entirely!

What we can all agree on though is we now have enough BEV models available in Australia to need to split the process of choosing an EV into groups and classes. (However arbitrary you may consider them to be 😉 )

For further information on model specifications and pricing, see also:

Bryce Gaton is an expert on electric vehicles and contributor for The Driven and Renew Economy. He has been working in the EV sector since 2008 and is currently working as EV electrical safety trainer/supervisor for the University of Melbourne. He also provides support for the EV Transition to business, government and the public through his EV Transition consultancy EVchoice.

The Impact of Inflation on EV Charging — EV Connect