Car driven with kids in the boot: Cops issue challan

Police is now relying on modern technology to keep a track on traffic rules violations and other crimes. Social media plays a crucial role as netizens share videos and images related to many traffic rule violations. There are CCTV cameras installed on almost all the roads but, these videos from other road users are often considered by traffic police department to issue challans. Here we have one such video from Telangana where car driver has been challaned for driving a car while kids were sitting in the boot with the gate open.

Sir,
Your information has been verified and E-Challan has been generated. Thanks for joining hands with Cyberabad Traffic Police in improving road safety.

The incident was reported from Hyderabad and the video was posted by Soncho Zara on Twitter. In this short video, a Hyundai Grand i10 can be seen on the road with its tailgate completely open. Inside the boot, there are three kids sitting. The video was posted with a caption that said, “How irresponsible parents they are? Pls take review sir and action. @KTRTRS @TelanganaCOPs @HiHyderabad @tsrtcmdoffice.” From the video that has been shared on social media, it looks like there was literally no space for children inside the car. As the tail gate was completely open, we get a clear view of the other occupants in the car.

There are three passengers sitting in the car while there are two sitting at the front. This is a serious offence as the driver has put the lives of the children at risk by making them sit in the boot. Cyberabad Traffic Police replied to the tweet and mentioned that they have verified the information shared by the person who shared the details related to the video and an e-challan has been issued against the vehicle. After the video of Hyundai Grand i10 was shared on Twitter many users have come forward talking about the irresponsible behaviour of the driver and also the parents. 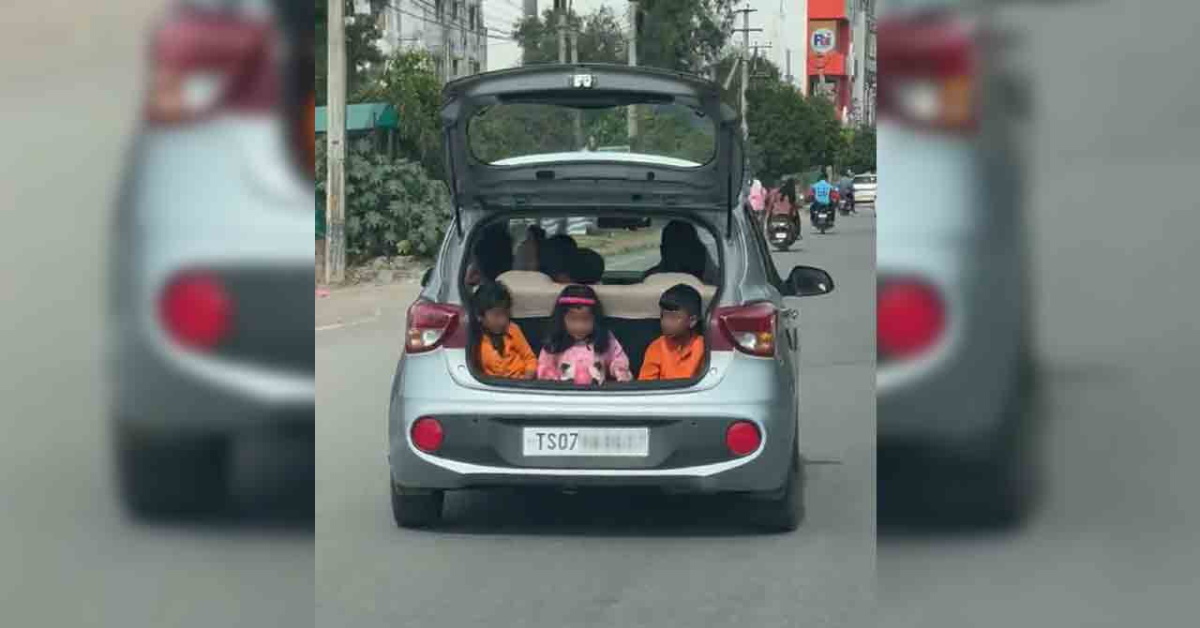 While some users say that a simple challan is enough as they did it as per children request. Many other users have asked for counselling and other actions. One of them has even asked authorities to cancel the license of the driver for the act. In India, we have often seen cars that are loaded with people. When you load a car with more people that what was actually prescribed by the manufacturer, it puts a lot more pressure on the suspension and engine. The overall weight of the car would increase and with that, there would be a change in handling characterestics too.

It engine will have to put in more effort to make the car move and thus the fuel efficiency of the vehicle would also come down. Just like acceleration, braking of the car would also be affected if there is more weight in the car. Sitting in the boot can be dangerous especially with the tail gate open. There is a possibility of passengers falling from the car under heavy acceleration as there is nothing to hold on. Boot space is for luggage and not for passengers as it is not all safe.