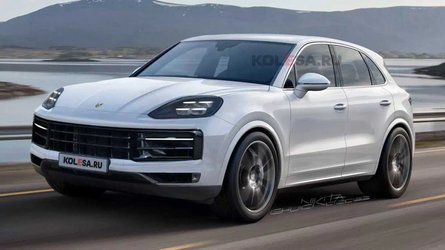 Porsche really doesn’t do camouflage. The automaker often gets to a point where it drops the majority of it, exposing the final design underneath way ahead of the official reveal. Recent spy shots caught the Cayenne in this revealing state of undress, and new renderings from Kolesa.ru preview what the production model will look like when it debuts

The SUV is getting a mid-cycle redesign, so a lot is staying the same. However, there are major styling changes to the front and rear fascias. Interior updates aren’t visible in these renderings. The grille is more open, fully spanning the front of the vehicle. The lower bumper receives a few tweaks, and the SUV’s headlights feature a new shape and a more upright orientation

The renderings depict the rear with a familiar-looking full-width taillight element. However, the production version might not look like this. Spy shots make it appear that the taillight will be a uniformly sized element across the back without the notch in the liftgate. The lower bumper houses the squared-off quad exhaust tips

Porsche hasn’t revealed any powertrain information yet, but rumors suggest that its 2.9-liter V6 and 4.0-liter V8 gasoline engines will be more powerful. We don’t have any specific info, but the updated engine lineup could include a revised plug-in hybrid setup. This could mean the model will receive a bigger battery, increasing the model’s pure-electric driving range.

One thing the renderings don’t show is the SUV’s interior, which previous spy photos revealed would receive a significant overhaul. The redesigned Cayenne will have a new dash design and a new shift lever. The revamped center console will feature cupholders behind a row of toggle switches.

The Cayenne offers the model in standard and coupe configurations, and it’s unclear if the two will debut simultaneously. It’s also unclear when the reveal will happen. Porsche hasn’t said a peep about it, but we expect the updated Cayenne to arrive for the 2023 model year. The performance variants should come later. Porsche is working on a larger electric crossover that might become the Cayenne EV.