If someone asked me now if I am willing to switch my SUV with some other car & incur a loss of Rs 2-3 lakh on it, I would do it.

BHPian NotanF1driver recently shared this with other enthusiasts.

Today happens to be the day when I am the one who posts about Tata’s terrible service support. I have read several ownership threads here regarding bad service and still went with a Tata. The car in isolation is excellent and ticked all boxes.

I had to face issues from the day of delivery which are detailed in Safari’s official review thread:

The third issue is still being addressed. I escalated the matter to Tata Motors via their Twitter handle. They were prompt enough to call me the very next morning and apologized for the ordeal and promised to get it fixed. Unsurprisingly, that was it, and no one else called or informed me on what are the next steps.

Now comes the worst part. I called up the SA and asked him for an update. He said that it would take one week to get the part delivered to the service center. He calls me back again in the evening and says “Sir, did I tell you the cost of the part? It is around 49 – 50 range”. I was shocked to hear him reconfirm that it was 50 thousand! He told me that the whole seat assembly needs replacement and since this is a case of some broken parts, it would not be covered under warranty. It seems to be a small issue from my visual inspection – see images below.

Left side lever – cable is detached from the lever

Right side – lever is attached (adding for reference) 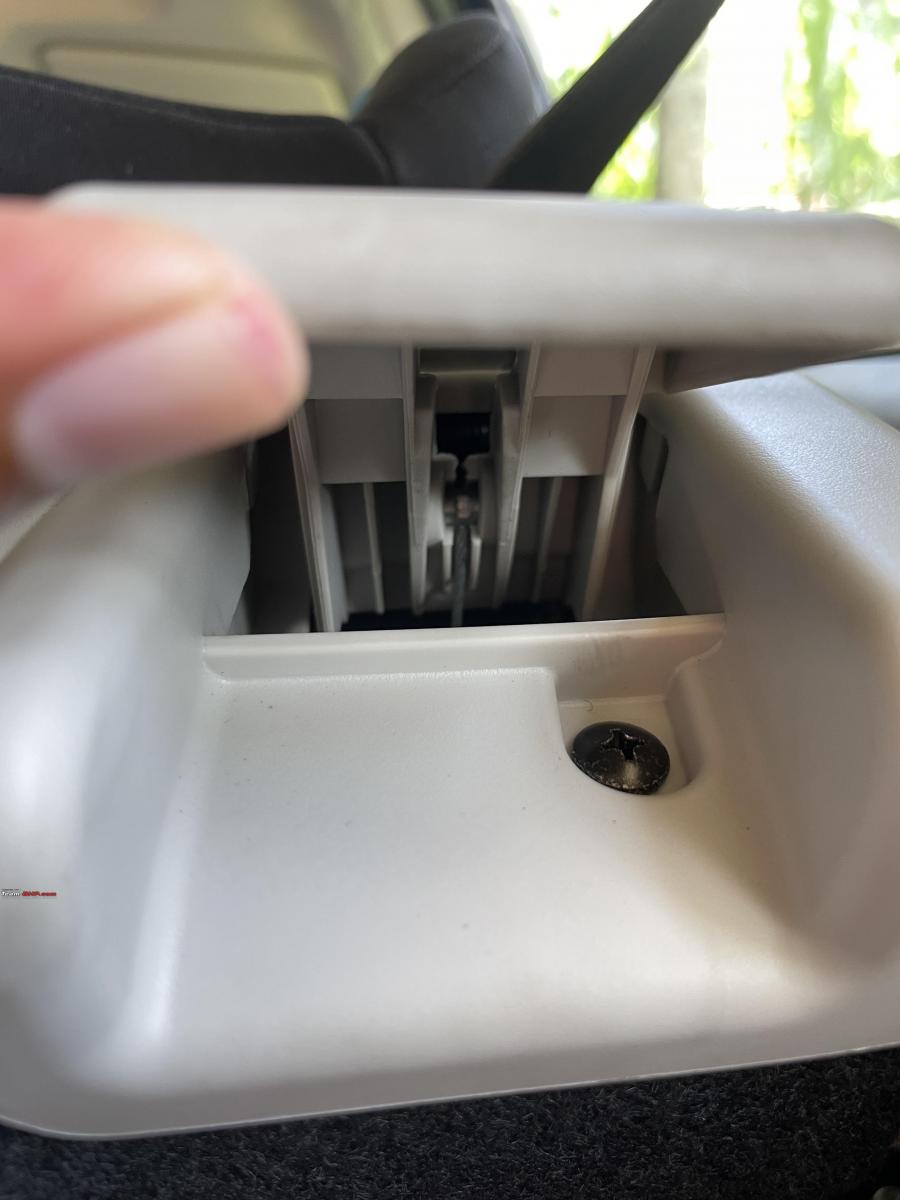 My question is, if a common man like me, is in such a situation, what are the ways in which one can proceed? Had I been a social media influencer or an editor with an automobile magazine, I could have used some influence. What next, BHPians?

Here’s what BHPian pjbiju had to say about the matter:

Sorry to hear about your experience. In my opinion, this is clearly a case of a manufacturing defect which should be covered under warranty. As a user, you are expected to use this seat folding mechanism thousands of times without any failure during the life of the vehicle. I am sure TATA would have a test rig to test this for thousands of cycles. From the pictures, it clearly looks like the failure is caused by poor plastic quality. And if for such an issue, the entire mechanism has to be replaced it reflects on a poor design. Good manufacturers always use Design failure mode and effect analysis (DFMEA) in their design process to study actual/possible failure modes and mitigate them.

This is not a part that can be abused by users (unlike for example a clutch) even if you use the seat tumble mechanism hundreds of times. All that the user can do is pull the lever to engage the cable. Usually, all warranty claims have to be sent to the manufacturer for study and approval. This policy may vary from manufacturer to manufacturer and some of them give the dealer the authority to make a decision based on the value of the component to be replaced. Manufacturers always ask the dealers to send the defective piece back to them for their study and analysis. 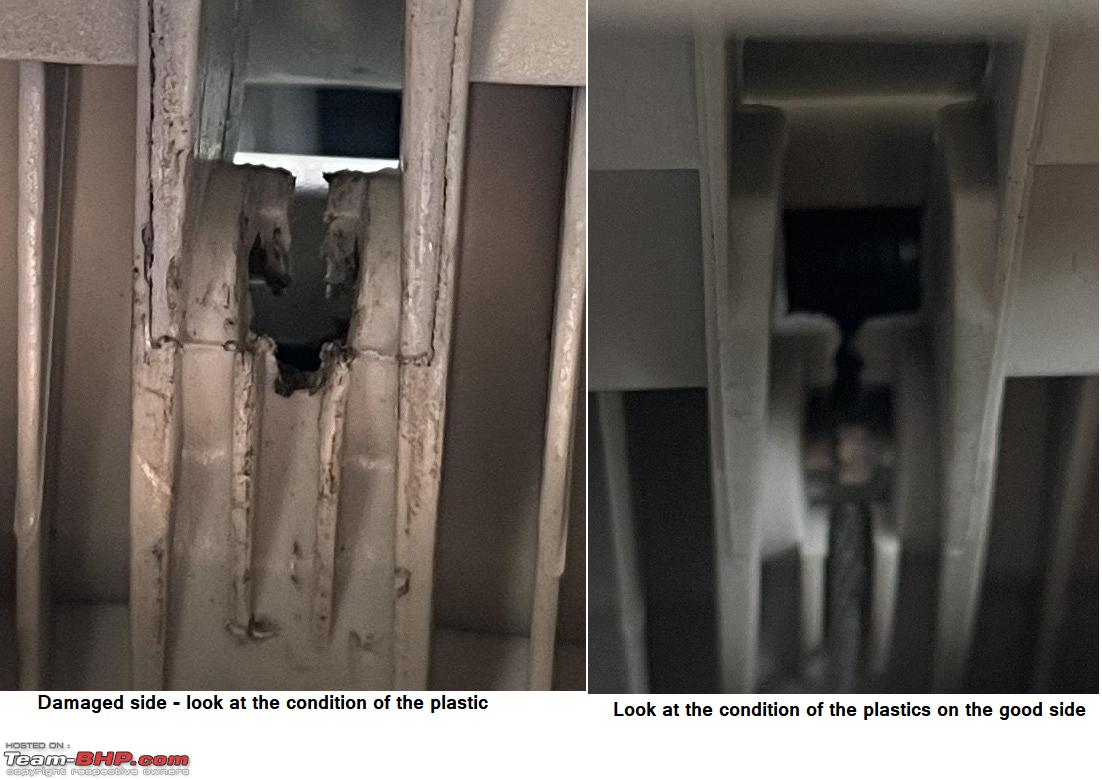 See the condition of the plastic between the bad side and the good side. Is the good side tumble mechanism used as much as the damaged side?

Here’s what BHPian Livnletcarsliv had to say about the matter:

I have been in your situation and still am.

All that I say is “YOU CANNOT DO ANYTHING” in this situation because we consumers are like rats for the OEMs as well as the government. Especially Tata with their lorry/bus attitude for such potential successful products like Harrier/Safari. Period.

The only thing that you can do is to wait till the issue is resolved by Tata. Since the product is under warranty, you can take it up with Tata directly.

Please understand this clearly. Harrier/Safari is totally a half-baked product from Tata. Unfortunately:

All in all, Harrier/Safari is like an assembled PC (which we used some 20 years back if you remember). Unfortunately, I realized this only after buying this car.

While Tata may score top safety ratings (Harrier/Safari still not tested), Tata will be the last in terms of reliability, ASS experience, fit, and finish. Tata’s attitude is so bad that they don’t even want to take the vehicle for service. Especially, Harrier/Safari being their flagship products, the customer and ownership experience is literally a nightmare and walk-on the nails. We should be very fortunate and lucky enough to own a Harrier/Safari without issues/niggles/problems.

Harrier/Safari is selling not because it’s a good product, but only because of the long waiting periods and undelivered commitments by M&M (XUV700), poor safety rating of the crowded Seltos/Creta, non-diesel options from VAG, expensive Compass & C5 Aircross, Tuscon.

While I am in your situation for the past 2.5 years, I unable to sell the car because this is my only car (and it is a BS4 model) and I cannot afford to spend an additional 15L-20L for a new car. My situation is – either I sell this and settle down for a small car below 15L or go for a used car. Unfortunately, my mind and heart don’t want to step down for a small car. Neither am I lucky enough to get the right used car (I had a bad experience many years back).

So, SELL YOUR CAR (if you can) and be at peace.

Here’s what BHPian shancz had to say about the matter:

Sorry to hear about your ordeal, your dealership interactions are infuriating and I haven’t even bought the car.

TML is living up to its proud credentials of hit/miss service and reaffirms my observation that it’s always the premium customers who seem to suffer the worst.

IMO the dealership is taking you for a ride, if you need a resolution visit some other dealer/workshop with hopefully better luck.

Honestly, I have given up on TML for improving their dealership and workshop experience and precisely the reason I don’t recommend anything above the Nexon to anyone and the recommendations below it come with a big warning of hit/miss service.

Second, your thoughts which had made me start a thread earlier.