My Hyundai Santa Fe: 5 months later, I bought a second one for my wife

I found the same listing of a Santa Fe when I was looking for car for my friend earlier. This car had some nasty marks but it drove well just like my Santa Fe and was kept well from the inside.

BHPian Sangwan recently shared this with other enthusiasts.

Hereâs my thoughts on my Santa Fe after having it for this long:

Some pics of my Santa Fe: 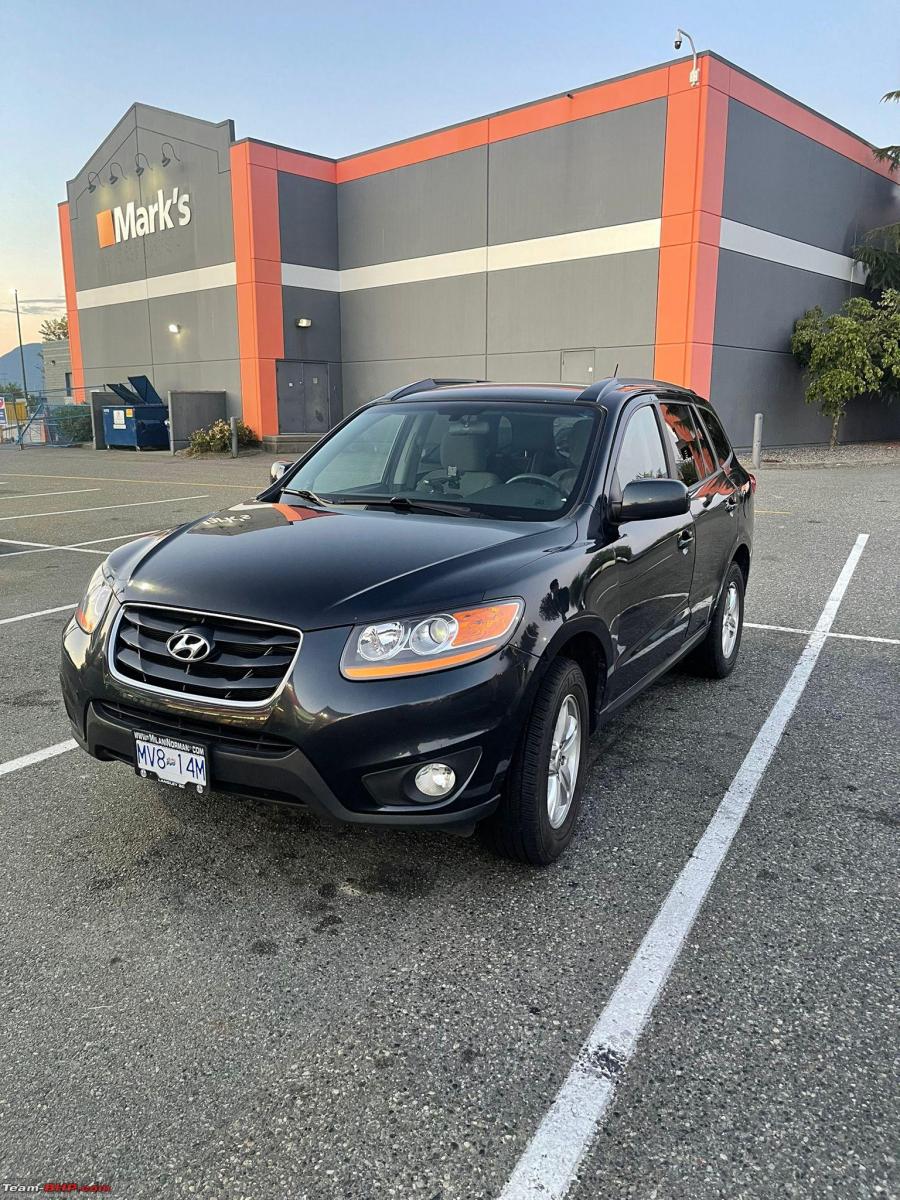 Another major update to this thread.

From now onwards, there will be review of not one but two Santa Fes. Yes! because I brought another one. Letâs get over the stats of this one:

Why another Santa Fe?

My wife got her class 5 DL (Full privileges license) and since I was starting another job there was a need of two cars. Due to my status in the country and being short of cash we were again planning to buy a car in cash and that too preferably somewhere around $5000. Let me tell you folks, this budget isnât good at all at least with how car prices are nowadays. Youâll not find anything.

I started looking way earlier for a nice car within our preferred budget but never actually got to the driving part because I would, or my wife or friend would find something while checking out the car and we would walk away. Rust/sorry state of interior or exterior/very high mileage on cars were majority of the reasons as to why we would turn down the cars. So, what are the options if you have a budget limited to $5000 +/- $500? Well, not many.

It was less than a month since I was looking for a car for my friend but now when my turn came, there were really not many fresh listings. Although I found one 1998 Nissan Pathfinder with just 139,XXX Kms on odometer and with manual transmission. The dealer was asking around $8000 but I told him it was $5000 because nobody will take it and considering it is the manual but how wrong was I. Somebody took it at actual asking price. Another point regarding the Nissan Pathfinder, so the older ones had 4 speed automatic transmission and that gave extremely low fuel economy numbers and thatâs why people were selling them, but it wasnât the fuel efficiency it was the rust these Pathfinders had on them. Dodge and Nissan are plagued with rust as they get older which you see also with other manufacturers but the above stated are leagues ahead.

The Mazda Tribute is also a clean looking and cheap car, but it was way too old for everyone, so it was rejected. The Toyotas on sale were old, had a lot of mileage and rust was starting to develop at least on the bumpers, so they were rejected as well.

I was even looking for manual transmission thinking something cheap and nice can be had but that too wasnât happening. And toying around FB marketplace I found this awesome car 2004 Infiniti FX35. It had new wheels, tires and had only 155,XXX Kms. It was fully loaded and didnât look like an 18-year-old car. The owner wanted $10,500 I requested $8,500 which was way over my budget and we agreed to meet but the owner got busy that evening and the meeting was cancelled and the rush in my head settled down and decided not to buy this car because at the end of the day it was 18 year old.

I found the same listing of a Santa Fe when I was looking for car for my friend A and this car had some nasty marks but it drove well just like my Santa Fe and was kept well from the inside. The car was listed as $8000 but I remembered that the owner was willing to let it go for even $7200 (The owner wasnât money hungry and knew the current state will not hold forever and should be realistic). Actually, what the owner was doing was that he paid $7200 when he bought the car so was just trying to even out. I texted him and told him that I am willing to buy it but for $6500. He replied and we decided to buy for $6800. And so, I bought another Santa Fe.

I wonât go in depths about reviewing this Santa Fe because I already have written in detail about the other one but would like to share the things which need to be sorted:

There is a crack on outer right tail light, so now I will buy both left and right outer tail light as now both my Santa Fe have covered both the sides: This is the worst bit, the ownerâs father lost consciousness while driving and the car rammed into a small pole or something and left this mark: There is this ugly dent around the fuel cover: The right ORVM is missing the plastic covering:

There are these lines underneath the right side tail lamp: The rear bumper has the paint peeling off at some places: At the mechanic’s shop the very next day: Overall, cosmetically things are bad, but they can be sorted out for cheap too, just need to have some patience. Mechanically, the driverâs side CV Axle need to be replaced as per the previous owner, but my mechanic checked it thoroughly and said its fine but still I have asked him to procure this part. The rotors and brake pads were changed yesterday. The tires are all season and are having enough tread on them, the owner serviced the car and the next one is at 195,000 Kms.

This brings us to the end of this post. I ended up going way over my desired budget, but I am happy because now both my cars are reliable and fun at the same time and will be good to handle all types of roads and weather. Signing off with some pics: