Kia is currently one of the popular car maker in Indian market. The manufacturer debuted in the market with Seltos SUV which is a popular SUV even today in its segment. After Seltos, Kia launched Sonet, Carnival and Carens in the market. They also have their EV6 on sale in Indian market. Kia Carens is actually a 7-seater MUV which is based on the same platform as Seltos. It was launched in the market earlier this year and it is now a commonly spotted car on our roads. Here we have a video where a Kia Carens turbo petrol owner shares his experience with the vehicle after owning it for 3 months.

The video has been uploaded by Walk With Neff on their YouTube channel. In this video, vlogger talks to the owner of a Kia Carens turbo petrol version with a manual gearbox. The variant seen here is the Prestige Plus Turbo variant. The owner of this vehicle was working abroad and had recently returned to India. When he came back, he started looking for a car in which he can travel with his family. 7-seats where a must and he looked for cars like Maruti XL6, Ertiga, Hyundai Alcazar and even Mahindra XUV700.

Also read: Locked out of Kia Seltos: Service centre breaks glass to enter inside the car

He finalised Kia Carens because it was a new vehicle in the market and offered decent amount of features. He had initially made booking for a diesel automatic variant but, as the waiting period of the diesel automatic variant was too much, he took the manual turbo petrol. The owner did not go for XUV700 mainly because of the waiting period and he wanted a car immediately. He has completed around 2,500 km on the car and it recently came back from the first service. The owner was very happy with the overall service experience and he mentions in the video that the staff is very friendly and have cleared some of his doubts about the car. 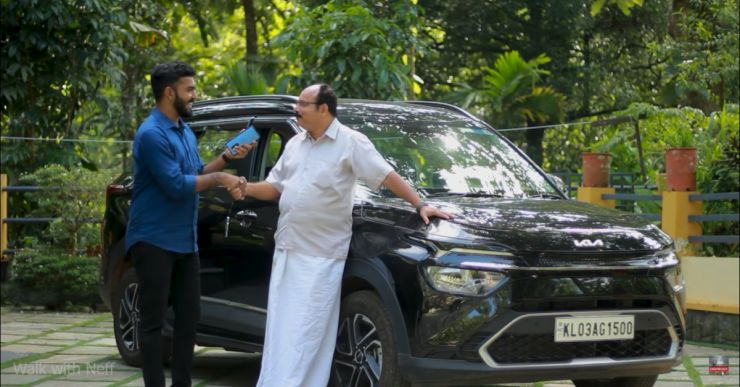 The owner paid around Rs 17 lakh as the on-road price for the Carens and he gets features like LED DRLs, alloy wheels, touchscreen infotainment system, cruise control, fully digital instrument cluster, 6 airbags, hill hold assist and so on. The owner is very happy with the overall performance and handling. He mentions that the cabin feels very premium and it offers him a good ride quality. The only problem he faces with the vehicle is that he feels that the car does not generate enough power in the first gear. Especially while climbing slopes, the car feels very underpowered. Driver will have to keep the engine revving to ensure that the car does not stall in such situations.

Owner mentions that it could be an issue only with the turbo petrol engine. Other than this, he does not find any issues with the car. Kia claims that the Carens turbo petrol variant returns a fuel economy of 16 kmpl and the owner has been getting around 13-14 kmpl. The Carens can easily handle bad road sections and the owner feels that it has ample ground clearance to actually handle broken roads in India. He is very happy with the product and he asks people to take a test drive of different engine options and decide on which variant and gearbox to choose.