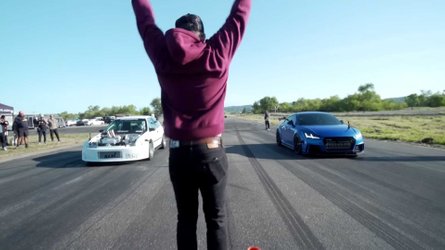 Right now, all attention in the Honda world is on the new 2023 Civic Type R. However, that car exists because of passionate Honda owners that, for decades, have built crazy-fast Civics like the 1994 hatchback featured in this Hoonigan video. When this car was new, who would’ve thought it would someday be a 1,085-horsepower, eight-second drag-racing monster?

The Audi TT RS it’s racing against has some performance pedigree with that RS badge. This is a 2018 model, which in stock trim makes around 400 hp from its boosted 2.5-liter inline-five. It’s not remotely stock though, featuring upgraded internals and other tweaks to make 900 hp according to the video. With that much power in the small TT going to all four wheels, it will be tough for even a 1,000-hp front-wheel-drive Civic to beat on an unprepped surface.

Here’s the thing. The Civic also has all-wheel drive. Wait, what?

It seems this Honda is something of a Frankenstein. The bottom end of the engine block is from a Honda Accord. The high-flow head is pulled from an RSX. The transmission is CR-V, and it uses powertrain components from a fourth-generation Civic AWD wagon. And it’s a full-on race car, so perhaps this will be a good matchup after all.

In fact, it’s a great matchup. We’ve seen quite a few This vs. That races before, many of which were blowouts. This time, the first race ends in a dead heat. The Audi stretches to an early lead after jumping the start, but the Civic recovers and charges hard to close the gap. Even after scrutinizing the video frame-by-frame, the race is ruled a tie.

Clearly, the Honda holds a power advantage so the Audi driver is given “the hit” for the second race. In short, it means the Audi leaves first by a small margin. Small is the key word there, but it levels the playing field perfectly between the cars. The street-ready Audi with its full interior takes an early lead, while the gutted racing Civic charges from behind. And amazingly, the second race also ends in a dead heat. It’s a This vs. That first, meaning the third race is a winner-take-all event.

Of course, that assumes there will actually be a clear winner instead of another tie. This time around, there is one car that clearly crosses the line first, but it’s still a close race. We’ll leave the suspense to the video, because it’s certainly an exciting battle leading up to the finish.

New Toyota Hyryder 2022: Observations after a day of driving