Alfredo Spill On Memphis Road Clogs Traffic Instead Of Arteries 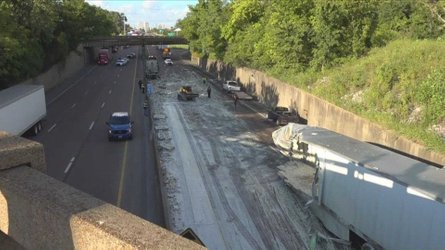 A semi-truck spilled jars of alfredo sauce on Interstate 55 near Memphis, Tennessee, on August 30. The messy and apparently quite smelly wreck forced the closure of several lanes of traffic until crews were able to clean things up. One woman had to go to the hospital but was not in critical condition.

The semi reportedly struck the median divider. The cause of that collision isn’t clear, based on local news reports. The video above shows that a portion of the trailer’s side is ripped open. This large hole is the reason for the jars of sauce spilling onto the road.

The crash snarled traffic around Memphis. Crews shut down all of the southbound lanes during the cleanup, so vehicles had to use the shoulder to get around. Some jars of sauce went into the northbound side of the interstate, closing two lanes there.

The first report of the incident came in at 4:43 PM local time, according to the local WREG news. This meant the interstate lanes closed during rush hour.

If you’re not familiar with it, alfredo sauce is a mix of butter, cheese, and cream. All of that milk content is going to go bad and start smelling quickly, especially with a high temperature of 86 degrees Fahrenheit in Memphis on August 20. Plus, the video shows that the oily stuff is sticking to the hot asphalt, making for a challenging cleanup. And, those issues are on top of the danger to vehicles of running over the broken glass jars.

In terms of how bad it would smell, this incident likely rivals the wreck of 30,000 pounds of frozen TV dinners spilling onto Interstate 80 near Placer County, California, in 2019.

Pagani C10 Teaser Video Leaves Much To The Imagination