SUV & Python rescued for a flooded river in Kerala

Heavy rains and accidents related to the same have been reported from different parts of India. Many districts in Kerala are currently facing heavy rains many low lying areas are already underwater. People of Chunkappara town in Pathanamthitta district woke up to overflowing rivers and flooded roads due to rain. An SUV that got swept away in the floodwaters and along with the SUV a python was also spotted at the spot. Both SUV and the python were later recovered by the locals. Video of people rescuing the SUV and the python have now surfaced online.

The video has been shared by Mathrubhumi News on their YouTube channel. In this video the news anchor can be heard saying that the water level in the area had risen overnight and people were not prepared for it. An SUV which belonged to a local was parked in his house and it got caught in the flow of the overflowing river. The owner of the car did not realise his car was gone until morning. He along with his friends started searching for the SUV and found it stuck in the nearby river.

He called for help and started looking for ways to get the SUV out. The SUV was stuck on one side of the river and on the other side there were many bushes and trees. As they were preparing to rescue the car, one of the local spotted a python on one of the trees. According to the report, it was almost 6 feet long. It was actually crawling through a tall tree which stopped people from reaching to it. Python soon got hid into a nearby bush and people went back at rescuing the SUV. 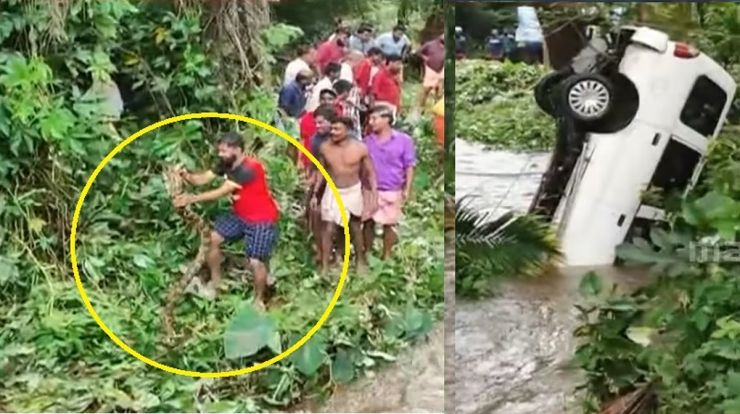 After few hours, the Python came out again and this time around, it was in the bushes near the road. It was on the opposite side of the river and one of the local who has experience in catching snakes caught the python. Meanwhile, the SUV which was in the river was also being rescued using a crane. The SUV was lifted from the river and on the other side, the local caught the python. The person who caught the python handed over the snake to the Forest Department. The video report also mentions that pythons are commonly being spotted near the area lately.

There have been several incidents in the past where snakes have found shelter inside car. As they are cold blooded reptiles, they look for warm and dry place which is what a car offers. Especially during rainy season, it is always a good idea check the boot and bonnet of the car before starting. Never stop or park a car near bushes, tall grass or greenery. In this case, the snake was not found in the car but, it could still have harmed livestock of the people living around. Pythons are known for their immense strength as they kill their prey by constricting them. If you come across a snake always call for help from animal rescue team and never try to deal things on your own as it might be dangerous.