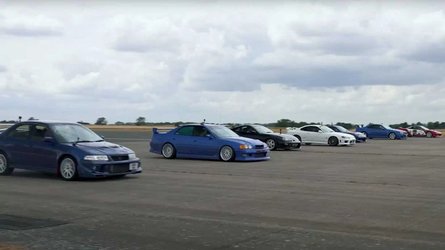 If you’re a fan of Gran Turismo, we’re pretty sure the most memorable nameplates in the earlier installations of the video game were the Japanese Domestic Market (JDM) models. After all, the game was developed and published by Japanese companies plus it came out in the ’90s when JDM nameplates were popular in both the car scene and motorsports.

Carwow wants to capture that nostalgia through a drag race, which features seven of the prominent nameplate in the Gran Turismo 2 video game. There are some notable omissions, but we’ll get to them later.

At the starting grip, the Honda NSX is the only mid-engined contender, with a 3.0-liter V6 residing behind the seats, making 275 horsepower (205 kilowatts) and 210 pound-feet (285 Newton-meters) of torque.

Finally, the last of the seven is the Mitsubishi Lancer Evo VI Tommi Makinen Edition, which also churns out 280 hp and 275 lb-ft (373 Nm) of pull.

All of the cars that attended this JDM Legends meetup come with manual transmissions. The Toyota Supra A80 was the most powerful of the bunch, but a tad on the heavier side just behind the Skyline GT-R. Meanwhile, the Mazda RX-7 was the lightest, even lighter than the Evo VI and the NSX. Only the Skyline GT-R and the Evo VI ran on all fours for this drag race.

A Honda Civic Type R and a Subaru Impreza WRX are two notable omissions, but we’re not complaining. However, before watching the race, which do you think among these cars in attendance was the quickest and fastest in a straight line? Let us know your thoughts in the comments section below.

New Nissan Z Coupe based on 370Z to avoid extinction