Pagani C10 Teaser Video Leaves Much To The Imagination 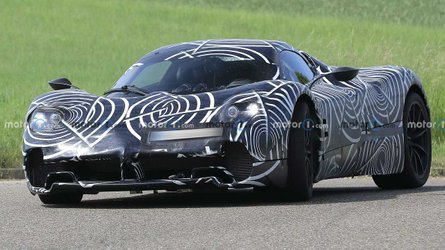 Italian hypercar manufacturer Pagani is a mere 30 years old, but it’s already established a strong reputation for exotic performance. That it’s done so in such a short time is noteworthy; that it’s also done so with just three long-lived vehicles is more impressive still. And now, following in the footsteps of the Zonda and Huayra, the company is preparing for a fourth product with the C10.

Slated for a September 12 debut, this is official teaser follows several months of spy photos. Posted on Instagram, it shows Horacio Pagani himself sketching out a car. We spot a wheel arch here and a fender there, and there’s just a flash that shows a “C10” badge, once again confirming the car’s name. In the caption, Pagani (the automaker) says it’s “about to write a new chapter in our story, a celebration, and affirmation of the vision which has always been our inspiration.”

While the C10 is “a new chapter,” it’s clearly part of the same book as the exceptionally long-lived Zonda and the 10-year-old Huayra. Based on spy shots, its grandest departure is at the front, where there’s a single headlight housing, rather than two independent lamps per side. A flatter nose, a wider greenhouse, and the new fascia are more modest changes, while leaf-like mirrors and flat sides are much more closely tied to the Huayra. Out back, twin vertical taillights flank a quad-tipped exhaust mounted high up, near the integrated wing.

Pagani has already confirmed the C10 will use a 6.0-liter V12 engine with twin turbochargers. Output is expected to sit well north of 800 horsepower, with power arriving to the rear wheels via either an automatic or dual-clutch transmission. According to Pagani, the emphasis is on weight savings, though, rather than outright power. And as for electrification, well, it’s unclear when battery packs or electric motors will make their way to the C10. Pagani strongly denied a report from July 2022 that the company had abandoned EV research in favor of continuing with V12 engines.

We’ll have much, much more on Pagani’s third model when it makes its official debut on September 12. Be sure to check back then for all the details on the twin-turbocharged, 800-plus-hp Pagani C10.