The video has been uploaded by sansCARi sumit on his YouTube channel. Vlogger starts by talking about the exterior of both the SUVs. The base S variant of the Scorpio Classic looks very basic and entirely different from the S11 variant. Starting with the front-end, the grille on the SUV looks different. S11 gets a vertical slat grille with chrome inserts while the S gets gloss black treatment instead of chrome. The new Mahindra logo on the grille is common on both the SUVs.

The bumper on the base variant are not body coloured and the headlamps are not projector units. The bumper does not get LED DRLs and fog lamps on it. The silver colour skid plate that is seen on the S11 variant is missing on the the base variant. The black cladding is all around the lower part of the car. The wheels on both the variants are also different. The base variant gets 17 inch steel rims and the S11 variant also gets 17 inch wheel but they are dual-tone alloy wheels.

The door handles on the S11 variants are body coloured and so are the ORVMs. The base variant however has black door handles and ORVMs. At the rear, both the variants come with same tail lamps but, the S variant misses out on features like rear defogger, body coloured bumper, roof mounted spoiler and rear windscreen wiper. The rear parking sensors are common on both the SUVs. 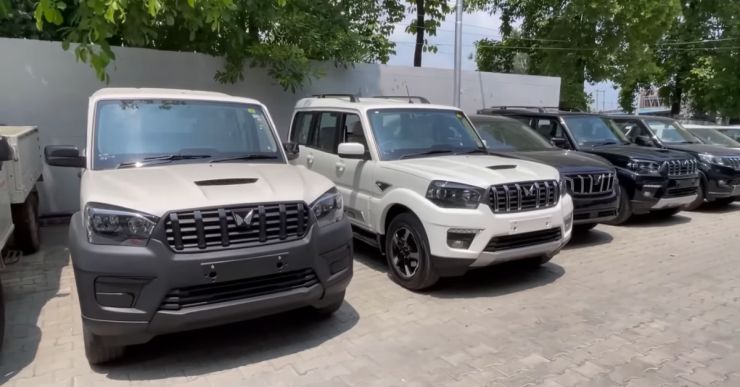 Moving in, the S11 variant of the Scorpio Classic offers a electrically adjustable ORVMs, four power window, soft touch material on the door pads, beige coloured dashboard and seats, height adjustable driver seat, multi-function steering wheel, cruise control, automatic climate control, 9 inch touchscreen infotainment system, wooden trims on the center console and so on. Coming to the base variant, the power window buttons are placed on the center console and none of the doors get any control. The steering is a regular unit and it comes with manual AC control, no infotainment system and the instrument cluster in the base variant looks the same as S11 but it shows less amount of information. The lower variant of the Scorpio Classic also misses on armrest for front and rear passengers. Rear AC vents are available with both the SUVs. Mahindra is offering Scorpio Classic with a diesel engine only. Both the variants are powered by the same engine. It is a 2.2 litre turbocharged mHawk diesel engine. The engine is offered with a 6-speed manual gearbox as standard and it generates 130 Bhp and 300 Nm of peak torque.