Can the mechanic cold start a Mahindra jeep after 8 years

If you have ever visited a local workshop in your town, you must have noticed some vehicles that have been parked for a very long time. Most of the time, the owners bring these vehicles to the workshop for repair works and once they realise that the owner does not have the budget to repair the car, he leaves the car there. Most of the time, the owners come back after arranging funds for the work but, there are cases when the owner simply abandons the car. Here we have a rusty old Mahindra Jeep that was parked on the road side for over 8 years. In this video, the vlogger tries to start the jeep. Did he manage to start the car? Let’s check this video.

The video has been uploaded by PETROLHEAD MOTOR GARAGE on their YouTube channel. In this video, the YouTuber and his friend go to the spot where the jeep was parked. The jeep had completely rusted and many panels on the SUV were missing. The condition of the car was very bad and one of the tyre was flat too. The owner of the jeep had asked the YouTuber to check if the jeep would start or not. The YouTuber who is also a mechanic by profession comes to the spot with his tools and starts working on it.

He opens the bonnet of the jeep and sees that there is no battery in it. It looks like the workshop or the owner might have removed the battery from the jeep. The mechanic connects the battery to the car and then checks if the car would start. As the jeep has been sitting out in the open, most of the parts had rust and components like the started motor and the engine were jammed. He brought a lever with him and using a hammer he hit the starter motor. He did this to make sure that the motor spins freely. Then he uses the same tool and hits the engine. He mentions that he hits the motor and engine in such a way that they do not damage any of the parts. 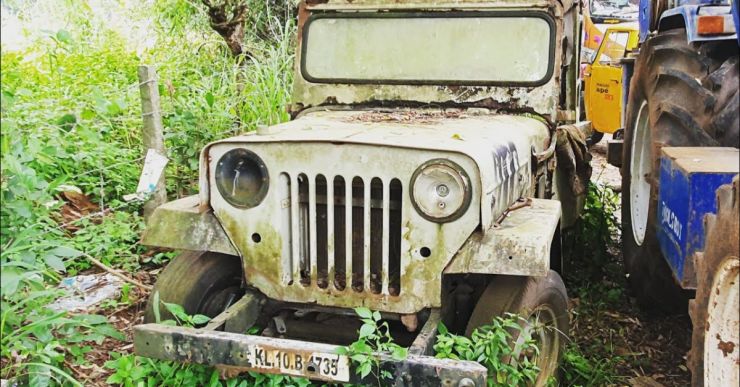 Once he did that, the tries to start the jeep but, the engine was jammed. He asks his friend to lift the rear of the jeep using a jack and then starts rotating the rear wheel in one direction. This is done to ensure that the engine components start moving freely. After rotating the rear wheel manually for some time, he attempts to start the jeep. This time, the jeep was showing signs that both the engine and the ignition motor were free. He then drains the old diesel that was their in the tank. It was mixed with water and that is not going to help. The mechanic brought diesel in a can with him and he placed the fuel line to the pump and overflow in it.

After this, the fuel was manually pumped and the mechanic tried to start the jeep. He could not do it with his 12V battery. He then connected another 12v battery to increase the power and after disconnecting the alternator, he manages to successfully start the jeep. The mechanic with some help from the locals he cleans the jeep and drives the SUV out on the road. The body of the jeep is completely rusted and it has to be completely rebuild. The mechanic drives the SUV to workshop for rest of the work.

Polestar 6 ‘LA Concept’ edition already sold out in a week