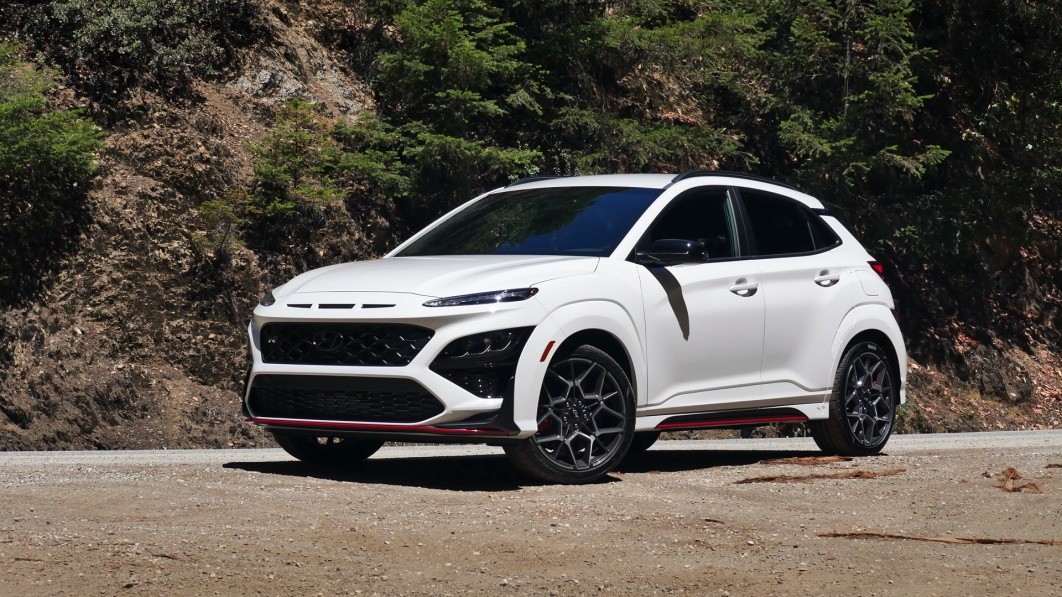 PALO ALTO, Calif. — We should all be prepared for more cars like the 2022 Hyundai Kona N, because if we want the hot hatch to survive, we’re going to have to come to grips with the fact that they won’t actually be cars any more. They’ll be crossovers. And sure, the Kona N is 6 inches taller and 100 pounds heavier than the Veloster N with which it shares much, but let’s not let the quest for perfection get in the way of appreciating mere greatness. Because, indeed, the Kona N is great. A little box of joy that makes fun noises and packs laugh-inducing power with, vitally, a chassis up to the task of controlling it.

It probably shouldn’t be surprising given the basic Kona was the first subcompact SUV to prove that such a thing didn’t have to be depressing to drive, and that their inevitable replacement of compact hatchbacks might not be so bad after all. It’s a fun, tossable thing with an available turbocharged engine that blows away anything offered by its competitors. The Kona N? It brings an RPG to that knife fight.

Its 2.0-liter turbocharged inline-four pumps out 276 horsepower and 289 pound-feet of torque, which is more than the Veloster N. It’s also 81 hp more than the Kona’s more pedestrian turbo trim levels. All that flows through Hyundai’s familiar eight-speed dual-clutch automated manual worked over for N service with unique gear ratios, a recalibrated control unit for faster shifting, and durability enhancements for higher-performance demands. It also includes three shift map settings and, if you prefer, big chunky paddle shifters that promptly respond to your pulls.

Putting that much power in such a small car (3,340 pounds) is as uproariously fun as you’d hope, accompanied by a tri-note exhaust that warbles out increasingly fun noises without venturing into juvenile territory with pops or crackles. Hyundai is trying to be reasonably serious here. Well, at least in terms of the way it sounds, looks and takes a corner. Press the big red “NGS” button on the steering wheel, and things get silly. “N Grin Shift” gives the Kona N a 20-second blast of adrenaline: Output is cranked up to 286 hp, and the transmission keeps the revs up high. The whoosh of the turbos start to out-decibel the exhaust; the digital tach lights up in yellow then red as revs rise; a timer ticks down from 20. I’m not sure how much quicker it really is for those 20 seconds, but the total experience has a sort of unhinged “hang on!” feel to it. It’s like running over a gold star in Mario Kart. They should really pipe in that music. 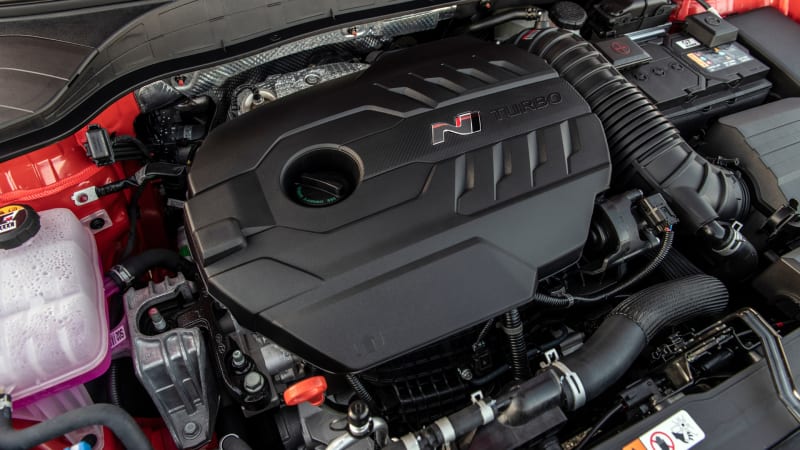 Of course, now seems like a good time to mention that all those horsepowers and torques flow through the front wheels only. According to Hyundai Head of R&D Division Albert Biermann, all-wheel drive would’ve added cost, weight and complexity that was counterproductive to the Kona N’s performance mission. Basically, they didn’t want it to cost that much or weigh that much. Besides, hot hatchbacks have traditionally been front-wheel drive – and the Kona N drives more like one of those than an SUV.

Steps were still taken to quell torque steer, however. The Kona N packs an electronic limited-slip differential, which along with whatever other suspension wizardry Biermann and friends enacted, prevent it from any sort of comical wheel sawing when gunning it in a straight line or powering out of corners. It’s no Mazdaspeed3. You still feel subtle tugs, but it’s acceptable, manageable and consistent with other high-powered front drivers. It also, at the very least, contributes to that “hang on!” feeling in the Kona N’s grinniest, shiftiest moments.

The e-LSD is certainly not the end of the chassis upgrades. According to Chahe Apelian, senior manager of vehicle development at Hyundai America Technical Center, the Kona N is effectively a Hyundai Veloster N with a Kona body plopped on top. Its Nürburgring-honed suspension is uniquely tuned, including three firmness settings for the dampers. Normal is akin to a last-generation VW GTI – on the firm side, but well damped and surprisingly refined on the beat-up concrete highways we drove from Palo Alto to Santa Cruz, Calif. Like a true hot hatch, this one can be comfortably driven every day. The middle Sport mode is still well within tolerable range, but there is an appreciable increase in firmness that’s beneficial on a curving mountain road. The firmest setting is really only appropriate for the smoothest of pavement, both from a comfort standpoint and a chassis stability one.

Given the general state of pavement, I mostly kept that middle Sport suspension setting engaged while keeping everything else in their spiciest Sport+ guises thanks to the Kona N’s Custom drive mode functionality. The N buttons on the steering wheel allow you to toggle between those custom settings and the full N mode that automatically puts all elements on max attack, from the suspension to the stability control and exhaust. A knob on the center console lets you toggle between the preset Eco, Normal and Sport settings. You then make your mix-and-match Custom selections by using the touchscreen. Yes it’s confusing. I needed to bring over Apelian to explain that touchscreen bit during a coffee stop. He probably won’t be there for you.

The suspension enhancements are paired with a variety of chassis strengthening measures to further minimize body roll and enhance roadholding. Unsprung mass is reduced with forged alloy wheels that also result in a wider track. That the Kona’s wheels are inherently pushed pretty far out to the corners is certainly no bad thing, either.

It all adds up to a car that playfully flicks between corners, happily turning in and tidily rotating with composure. Could a higher-speed turn on a track reveal some off-throttle histrionics or other untoward behavior consistent with some other high-powered front drivers? Maybe! But I wasn’t going to find out with Redwoods inches from the road. At sane(ish) speeds, the Kona N is a hoot. Importantly, though, it never feels overwhelmed by its power or handicapped by its height. 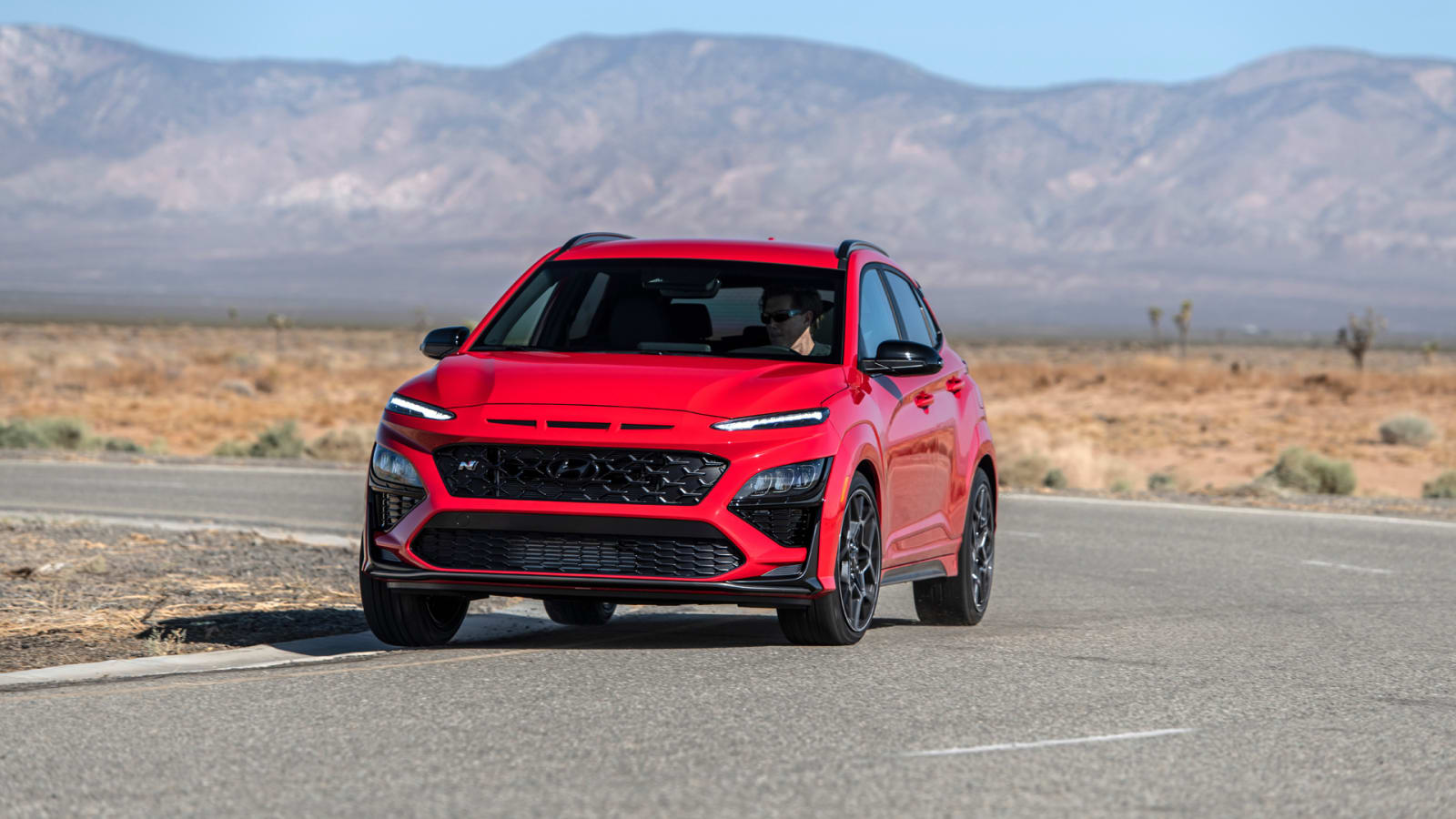 Indeed, Biermann admitted that his engineers originally lowered the Kona N by an inch, but he quickly nixed that. They already had the Veloster N, and he didn’t want to eliminate one of the key benefits and points of appeal for an SUV, even a sport-tuned one. Ultimately, he said that creating the Kona N wasn’t about ultimate lap times or pure cornering speed, but rather ensuring that the car feels and responds in a way that’s consistent with the N philosophy of making everyday cars also capable of spirited driving. The Kona N most certainly accomplishes that.

And besides, we’re not talking about an X5 M, here. The Kona N still weighs about as much as a 2022 GTI and has a modest ground clearance of 6.8 inches (it’s actually 0.1 taller than other Konas). It never feels heavy, tippy or tall – all attributes you’d expect from a hotted up crossover and get in certain examples like the Mercedes-AMG GLA 35. The only minor exception is the seating height, which feels artificially high given the rest of the car. If you’re tall, however, at least that results in abundant under-thigh support. The seats themselves are amply bolstered and eight-way power-adjustable. The latter is often missing in hot hatches and sporty compact cars.

The N’s all-digital gauge cluster adjusts its design based on drive mode, with a white speedo and tach in Normal mode (it looks a bit out of place) that gives way to red-accented carbon-fiber-look gauges in Sport mode (above left). These designs are shared with the new Santa Cruz and other Hyundais. Engaging N mode or one of your Custom drive modes brings up a unique design featuring a central tach with a digital speedo in the middle. Mostly superfluous go-fast readouts flank it.

The rest of the interior is then shared with Kona, including decent materials and build quality, above-average interior storage and one of the easiest tech interfaces to use. Its back seat and cargo capacity are less than what you’d find in most other subcompact crossovers, but then it also has four proper doors unlike the Veloster.

Pricing has not yet been announced, but we can’t imagine it being much different than a DCT-equipped Veloster N at $34,745, including the destination charge. That seems fair enough, but of course, there’s really nothing that aligns with it in terms of performance or body style. I suppose the same thing could be said about the Veloster N, but then there’s no doubt the market will prefer a crossover over an oddball three-door hatchback. And honestly, that won’t be such a bad thing. The Kona N is the real deal.